The vineyards and the winery are located in the very heart of the Pisco Valley, in the Humay district, about 25 kilometers from the sea. This valley has foothills to the north, and to the south some dunes with beautiful oases. At the height of Murga, the valley is 4 kilometers wide. The Pisco River crosses this valley, starting at the height of Huaytara, and flows into the sea, between the area where the Hacienda Caucato was formerly and the current city of Pisco. This same river bathes the north side of the project fields. The soils of the valley nearby are sandy loam, with a noticeable presence of medium and small stone.

The pre-Hispanic inhabitants of the area began to call the entire valley Pisco because of the abundance and variety of birds that can still be seen today. Later, with the arrival of the Spanish, the valley was considered one of the best locations to establish a capital. This area, known as Old Lima, is very close to the Murga. During those first years of the colony, the cultivation of vines and olive trees began.

In 1890 the Bellido family acquired this property and took over the ranch; a task that has been maintained, uninterruptedly, decade after decade, passing from generation to generation, until today.

Historically, the Spanish settlers planted vines in the Canary Islands in the “Hoyas” style (those moon-like craters in the ground with small stone walls around them like you see on Lanzarote. This protects grapes from whipping wind damage). Vines were planted similarly here in the desert and over the years morphed into‘Hoyas de Murga' and eventually ‘Joyas de Murga,’ a name that was taken as a brand for the wines below.

In 2014, a conversation between friends and professional lovers of wine and pisco - the current partners Alberto & Arturo - was the first step in bringing a great winemaking idea closer to reality. Shortly after this conversation they began planting their first hectares, with vines of the following Pisco-approved varieties: Albilla, Italia, Negra Criolla and Quebranta (there are only 8 types of vines allowed in Peruvian Pisco production by law).

Alberto Di Laura, also known as "El Caballero del Pisco,” is somewhat of an alchemist and is also a renowned pisco distiller with an impeccable career. He agreed to be part of the project and is responsible for guaranteeing the quality of the grapes, because as he declares: 'distillation begins in the vineyards.' For the Pisco spirits he is personally in charge of the distillation, using electrolytic copper stills that were manufactured in Peru under his design and supervision.

In 2017 the first distillation test was carried out, on a small scale, and it was noted that the distillate produced was of excellent quality. A year later, the idea arose of making wine from the same pisco vines they had planted, under a chemical-free winemaking process. Under the management of Arturo Inga, sommelier and official taster of Pisco, they brought in Pietra Possamai, an outstanding young Brazilian winemaker, with multiple vintages under her belt. Her energy, creativity and love for nature, together with her vast professional experience, translate into the fun complexity of Murga’s wines.

“Our [goal] is to offer wines and piscos, without chemicals - in the field and in the winery- respecting tradition, and at the same time, using the best quality materials in their production.” Arturo Inga

There are no pesticides or herbicides used in the vineyards. Additionally they do not use plastic tanks, but stainless steel, while the stills are made of high-purity electrolytic copper. Likewise, for the wine process, in addition to using stainless steel tanks, they use concrete eggs, terracotta amphoras and oak barrels free of toxic elements in their composition.

“Our [goal] is to offer wines and piscos, without chemicals - in the field and in the winery- respecting tradition, and at the same time, using the best quality materials in their production.” Arturo Inga 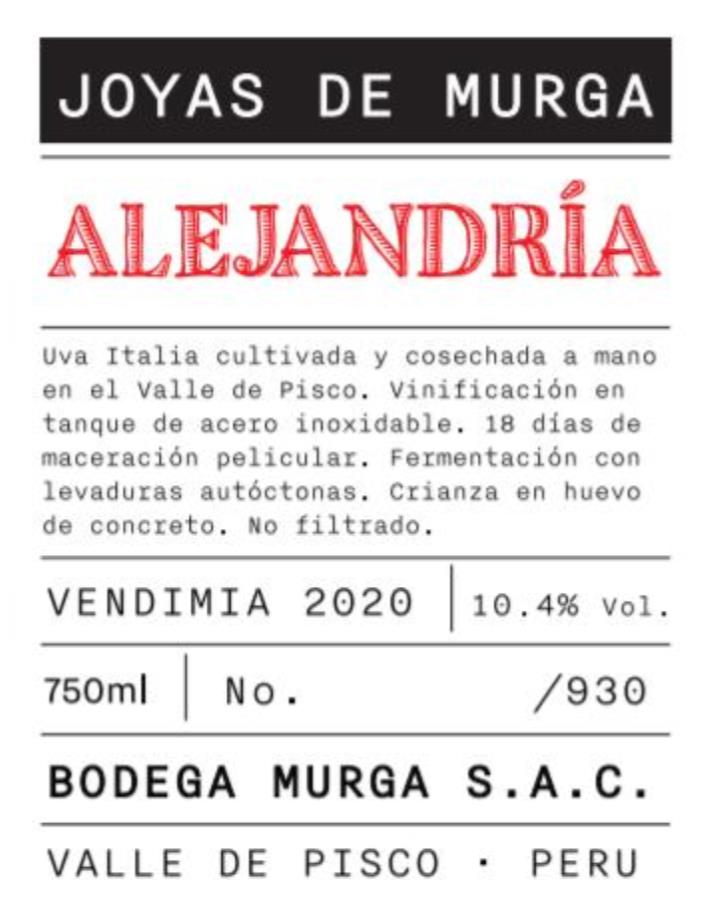 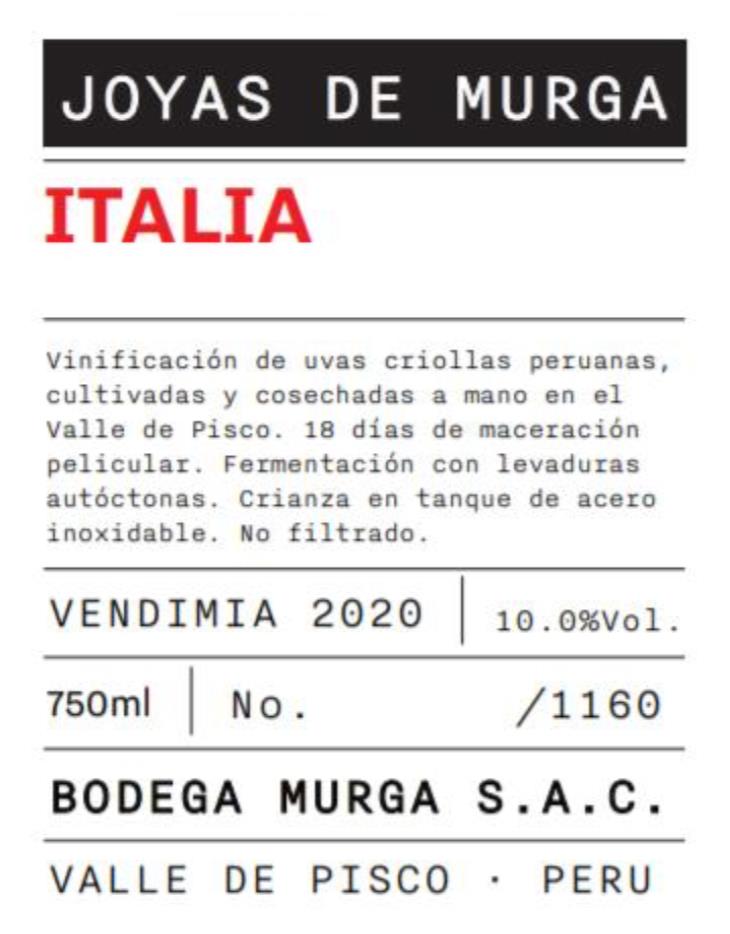 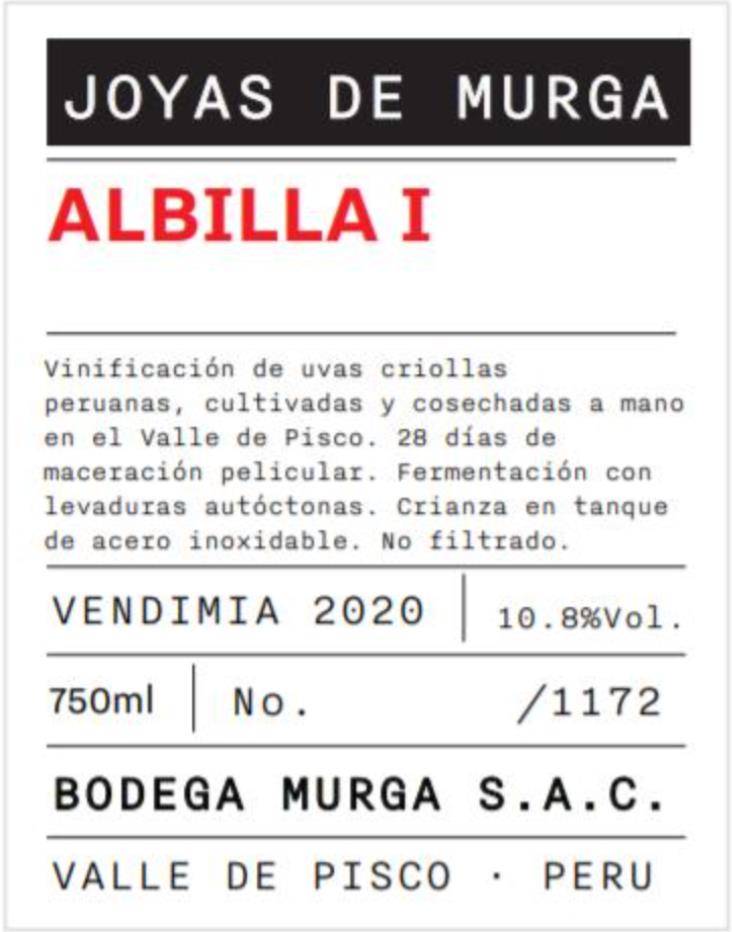 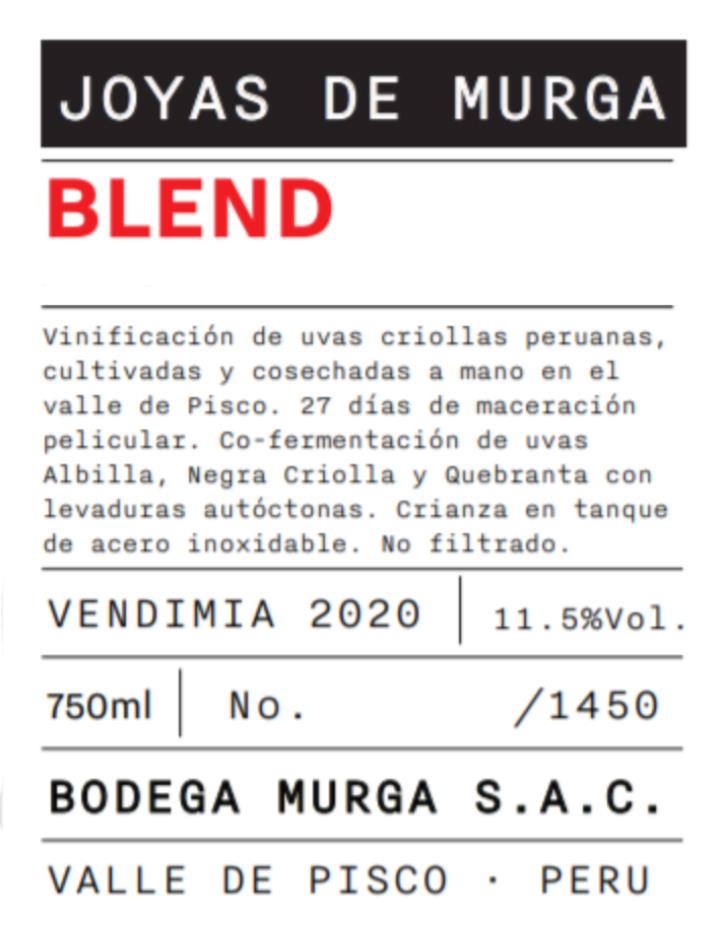 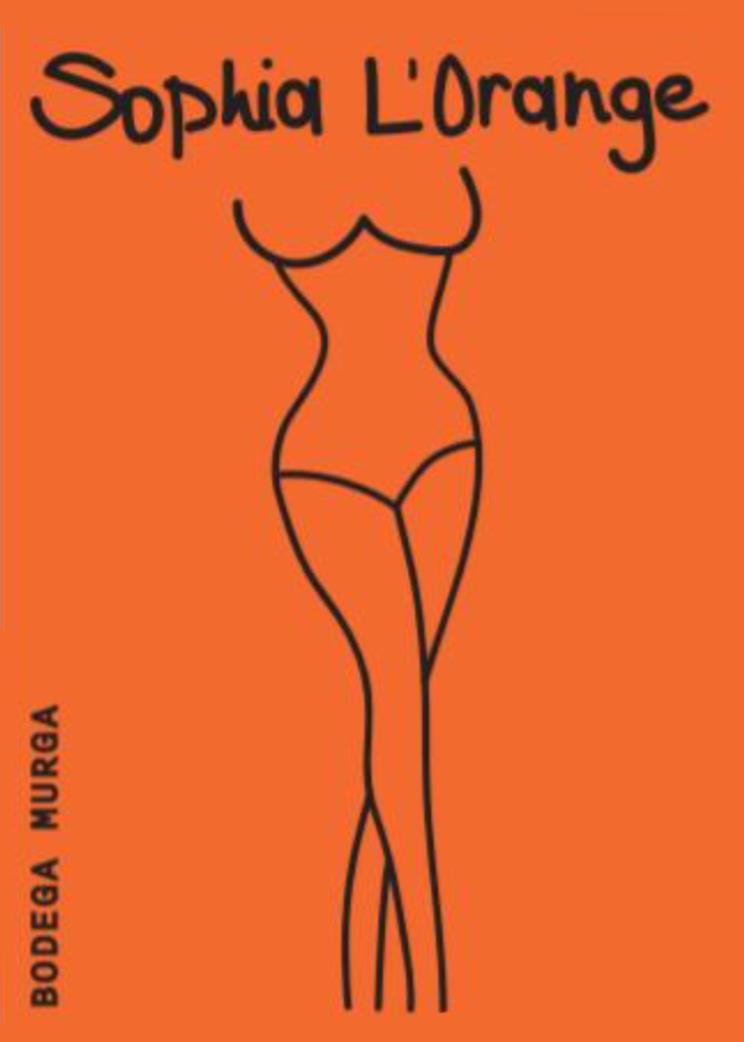 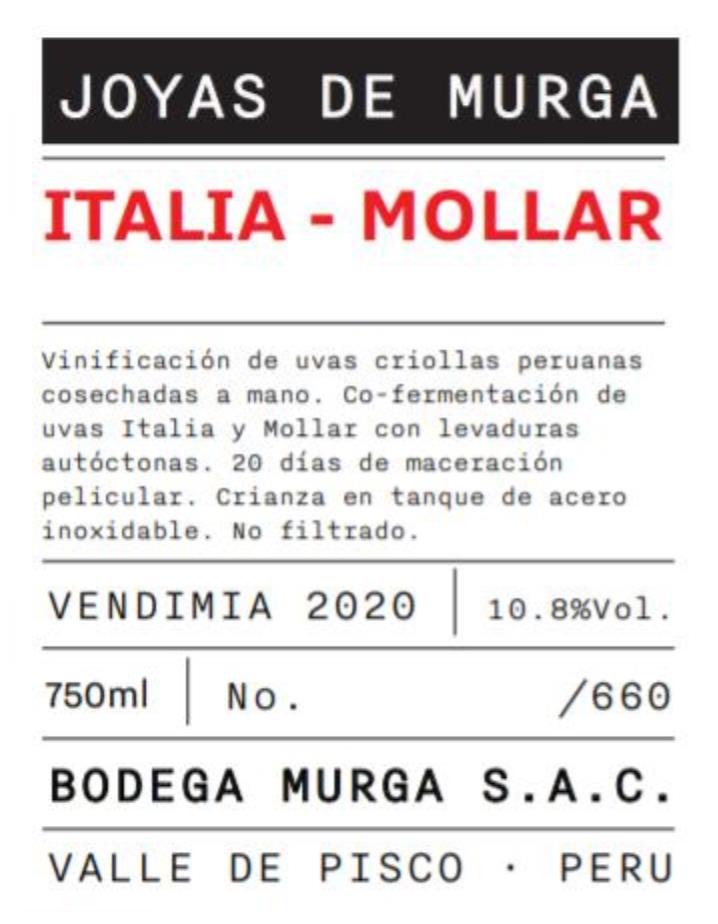